This past weekend I saw the film "In the Heat of the Night", starring Sidney Poitier and Rod Steiger. I had never seen it before and it's a wonderful film on many levels. I was particularly struck by the performances of the lead actors, and how much they convey with body language alone. The dialog is very understated, leaving a lot of room for the characters to communicate their thoughts and emotions physically. Watch this scene on YouTube, particularly from 0:20 through 1:03. Here the sheriff, played by Steiger, is trying to convince visiting detective, Poitier, to stay and help solve a murder. I wont spoil the rest of the movie for you, but suffice to say these characters don't like each other much, which adds a lot of tension to the scene.

Let's start with Rod Steiger's performance. In the first two shots, he's basically just holding a pose. Within that pose he's doing tiny head accents and moving in closer, but the rest is all in the face. I love how he's cocking his head to one side and getting in Poitier's face. This performance is wonderfully simple. 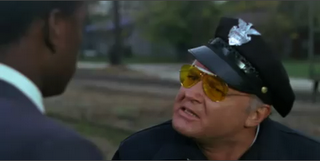 Throughout this film Poitier is the paragon of restraint, both in his words and in his movement. Here he's dead still, except for his eyes, but you can read so many emotions into it. I don't know if you could get away with this level of subtlety on an animated character; I suppose it would depend on how stylized the character is. 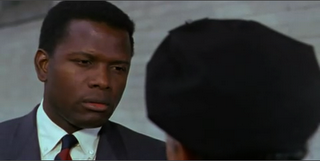 Finally, there's the wide shot. Steiger walks away, confident in his argument, and then stops and turns to allow us to focus completely on Poitier with him. Poitier pauses, as if he's still waiting for the train, then you see his resolve crumble, as he grudgingly realizes that he must stay. His stilted, boyish walk and the way he picks up the suitcase are so specific and entertaining to watch. Neither character will admit out-loud that they need each other, and their bodies communicate both resistance and acceptance. So juicy! 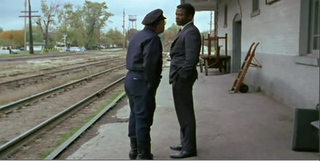 Scenes with this much depth, subtext and subtlety are rare in animated films, and I hope to see much more of them in the future. So often the writers feel like they have to have the characters say everything they are feeling; it's wonderful when the director can trust the animators to be actors and let them communicate non-verbally.
Posted by Victor Navone at 10:37 PM