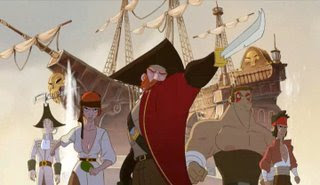 These kids at Gobelins have got it going on. Their film Pyrats has great physical animation, nice staging, it's entertaining and it's got a healthy dose of GBO*. And it's it 2D!

No, not THAT Nemo. This is Studio Ghibli's version of Little Nemo in Slumberland from a 1984 pilot. This clip is amazing:

Here is some information on the production and how it died.
Posted by Victor Navone at 10:21 AM 9 comments: Here's a good story in the LA Times about Ed and Pixar's reinvigoration of Disney Animation.
Posted by Victor Navone at 8:36 PM 2 comments:

I'm doing a Q&A on the forums at StrutYourReel.com right now. Feel free to drop by and ask a question. I'm way behind on answering email, so this may be a better venue for answers.
Posted by Victor Navone at 3:38 PM 1 comment:

My shots on "Cars" - UPDATED

I've had some requests to list the shots I worked on in Cars, so I'll try to remember and describe them below. Of course I can't actually include the clips here, but when the DVD comes out I'll put together a reel. Anyway, here are some highlights:

Winner's Circle - I did two long shots of McQueen talking to Cori Vetta about how "there's a lot more to racing than just winning". I also did his pit crew team to the point where they storm out and say "we quit Mr. One-Man-Show!" These were really hard to choreograph because of all the characters and the changing tires (lots of constraint switching). I like how the pitties turned out, but I'm not so sure McQueen is pushed far enough.

Traffic Court - I did some McQueen shots where he's talking to Sally ("I'm sorry, did I scare you?" and "Do what you gotta do baby. Oh but listen - be careful. Folks 'round here are not firing on all cylinders..." I also did some Mater stuff in this sequence, like when he's playing with his side mirror and blinds himself, and when he's blowing the spit bubble. McQueen was really fun to animate here because he was being sleazy. I had a really hard time animating the Mater mirror shot. I think I started over twice, and I still can't tell if it's funny or not.

Racing Doc - Some shots of Guido and Luigi just before the race - "My friend Guido he dream of giving a real race car a pit stop" and the little happy pee-pee dance that Guido does while McQueen explains he doesn't need a pit stop. I also did the shots at the end of this sequence where Mater flings his tow hook into the canyon, hooks McQueen and hauls him up. "I'm startin' to think he know'd you was gonna crash!" "Thank you, Mater, thank you." Lasseter wanted Mater to use his tow hook like a fly-fisherman, which meant the I ended up sculpting the shape of the rope on every frame for about 48 frames. I actually had to do some posing between frames, too, to get the motion blur right. Ugh.

Doc instructs McQueen - a couple shots of Doc Hudson ("I'll put it simple... You'll find yourself turning right"). These were pretty straight-forward, but it can be difficult to get good mouth shapes on Doc because of his long bumper. We tried not to make it look too rubbery or curly.

Best Friends - the first 6 shots of Mater driving backwards through the Cozy Cone Motel, starting with the shot shown in my Disney interview in the previous post. These were the first shots I did on Cars.

Doc is a famous race car - I did Mater's spit-take ("He did WHAT in his cup?") and the reactions of the other cars at Flo's (Sheriff "Well you are looking a little peekid"). I also did Doc Hudson watching from his window as the other cars doubt his racing past. A lot of characters to handle but still fun. It's always nice to have a great punchline to work with, too.

New Tires - I did some shots of Guido and Luigi ("Gratsi, Mr. Lightning, gratsi!" and Luigi raising McQueen up on the lift). Guido and Luigi are always fun to animate. I came up with the idea of Luigi sort of hugging McQueen with his front tires, and I wasn't sure if Lasseter would buy it (he did).

Goodbye - I did a few shots of Sally talking to McQueen just before he leaves ("No, it was much more than that"). It was nice to do some serious acting for a change.


That's all I can remember right now. I also did some shots for promotional material (including my commercial) and some other stuff that I can't talk about yet (you'll see it on the DVD).
Posted by Victor Navone at 10:21 AM 9 comments:

Alright, here's my interview from the Disney Channel. It is what it is: 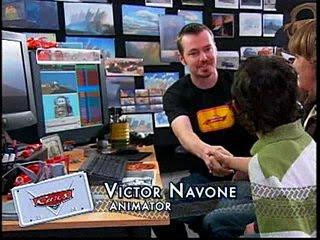 Pocoyo! I've only seen one episode (on YouTube, of course) but it's really cool. Super simple characters and surprisingly good animation. Not something you expect to see in a kids' show. The duck character absolutely rules! Unfortunately it's only showing in UK, Canada and Japan right now. I found out about it from Angus Maclane who saw it at Annecy. Hopefully they'll start playing them in the US soon, or at least make them available on NTSC DVD. Here's a sample episode:

Just got back from vacation today. So why am I blogging already? Because I am a pathetic geek. And because I don't feel like unpacking or going to bed. Anyway, I don't have time to talk about my work on Cars right now (hope you saw it!) but here's a link to some of the fluffy documentary stuff on the Disney Channel:

I'll post my interview too, when I get a chance.
Posted by Victor Navone at 11:08 PM 3 comments:

Wow, big day for animation, or at least for my blog.

Here's the teaser trailer for Ratatouille, the film after Cars, due next summer. I'm not working on it (I'm working on the film after Rat) but I've been watching their progress and the animation is crazy good. So is the lighting. So is... Everything! This movie is going to blow your mind. But you'll have to wait another year!

I'm going on vacation for a week and half, so these posts will have to hold you for a while.
Posted by Victor Navone at 11:36 AM 7 comments: 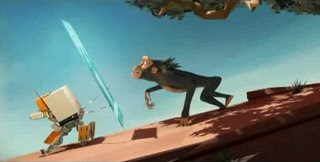 I just found this amazing student film called "Burning Safari". Wow. I'm glad I already have job. Those french schools like Gobelins and Supinfocom sure churn out some awesome students. You can see more of their stuff here. 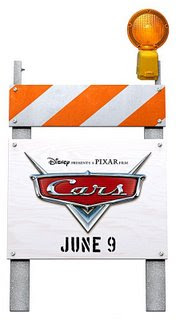 So, what are you doing this weekend? Anything fun? Well... If you, you know, get bored or something, why not go check out this little movie I worked on? What? You haven't heard about it? Well, go see it anyway. Better see it twice, just to be sure. And then come back here and let me know what you thought of it. Unless you hated it. 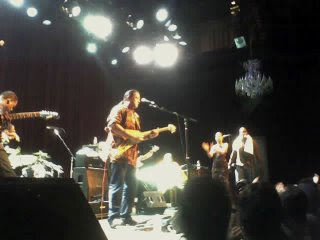 Last night a bunch of us animators caught a live performance of Steven Seagal at the Fillmore in San Francisco. He pumped us up with classics like "Love Doctor" and "Alligator Eggs", and then really brought the house down with the funky "Feet Don't Fail Me Now". Surprisingly, he got through the whole show without killing anyone! Truly a monumental evening for blues enthusiasts, Buddhists, and action lovers alike.

P.S. His band really does rock.
Posted by Victor Navone at 9:59 PM 3 comments:

You can find some interesting stuff on YouTube.com if you type "banned cartoons" into the search field. One of my favorites is this commercial that the Flintstones did for Winston Cigarettes back in the 50's:

Most of the others involve really racist material, so I wont link them here. There are some great WW2 classics, like "Russian Rhapsody" and "Der Fuehrer's Face". Hey, Nazi's are always fair-game for satire in my opinion.
Posted by Victor Navone at 8:48 PM 2 comments:

I'll be on the Disney Channel tonight

Okay, I'm taking a risk posting this, as it's likely I'll end up looking like a complete idiot. During a broadcast of the movie "The Parent Trap" on the Disney Channel at 8pm tonight there will be a series of interstitials in which characters from the show "Hannah Montana" make a trip to Pixar to find out how we made "Cars". I am one of the animators they "meet" and I try to explain the process of 3D animation in very simple terms. I haven't seen any of the footage so I really don't know how it turned out. The kids were cool and the experience was fun, but don't look for a whole lot of enlightening information or deep drama. You may get in a good laugh at my expense, though.

Of note: the office we filmed in is NOT really my office. They dressed up a different room, and the photos on the desk aren't my family.
Posted by Victor Navone at 11:41 AM 5 comments: