Last week 30,000 people attended the 2007 San Diego Comic Convention. I was there in my home town on Friday and a little bit on Saturday, and it was pretty overwhelming. I've been going since 1993, and it has at least tripled in size since then. I barely had an opportunity to visit all my favorite vendors, and I only made it to one panel: the WALL-E panel, of course!

There, 7,000 lucky guests were treated to glimpses of preproduction art, animation tests and a synopsis of the film by director Andrew Stanton. They also got to see a sound demo by Star Wars veteran Ben Burtt, and about 7 minutes of footage from the film! Here are some reviews of the event:

Audio Interview with Andrew:
http://www.comingsoon.net/audio/stantonwalle.mp3
"I think that dog is happy to see me" / "I don't care what the math says, it's not doing what it's supposed to" / "I've been watching a lot of BSG"

http://www.comingsoon.net/news/movienews.php?id=22911
"It certainly looks like another imaginative, fun film from Disney and Pixar. It also looks like Ben Burtt's going to win another Academy Award for sound design."

http://www.slashfilm.com/2007/07/28/comic-con-indepth-wall-e-details-revealed/
"The footage that was shown was unlike anything that has been ever done by Disney before. I’d call it an anti-Disney movie."

http://www.cinematical.com/2007/07/29/comic-con-prince-caspian-and-wall-e-the-disney-pixar-pre/
"If you're reading a story about Comic-Con on a film site I probably don't need to tell you how much Ben Burtt rocks and how much of a contribution he makes to any film he works on."
"In short, the clip was great and I can't wait for the film."

http://weblogs.variety.com/thompsononhollywood/2007/07/comic-con-toon-.html
"Going in to Comic-Con, we published a list of the 10 most anticipated movies being presented in San Diego. Coming out of the convention, the two films I can't wait to see in their entirety were nowhere to be found on our original list (that's the beauty of Comic-Con, really).
First, there's Pixar's next toon, "Wall-E," from "Finding Nemo" director Andrew Stanton."

http://forums.somethingawful.com/showthread.php?threadid=2574379
Same thing here: http://www.aintitcool.com/node/33497
"we got an awesome 10 minute clip from the beginning of the movie. Andrew Stanton stressed that it was unfinished. Still, it looks loving amazing"

http://www.reelzchannel.com/outtakes/blog.aspx?blogentryid=409
"Where as Fox's Robots took the standard approach to robot animated characters we've seen a million times before, Pixar's creativity shines through in a very original way."

And here are my photos from the 'Con.
Posted by Victor Navone at 8:10 AM 2 comments: 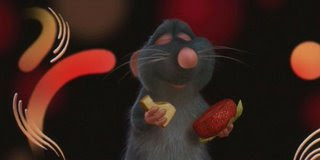 Michel Gagné has posted an article on his web site about how he created the 2D visuals for the tasting sequences in Ratatouille. It's not often that you get to see this sort of abstract animation in a feature film, and trying to visualize flavor must have been especially challenging.
Posted by Victor Navone at 9:12 PM 6 comments: 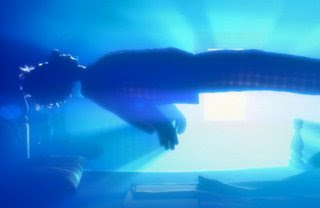 The lastest Pixar short film, "Lifted" is now available for purchase on the iTunes Store. Hopefully you've already seen it in front of Ratatouille...
Posted by Victor Navone at 9:24 PM 7 comments: