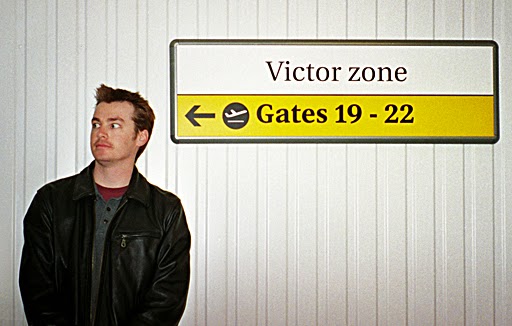 I was born on November 2, 1970 in San Diego, California. My father was in the navy so we traveled to a few other cities, but eventually returned to San Diego in 1979, where I resided until 1999. I am currently located in the San Francisco Bay Area.  I married the incredible Candace Apple in December of 1996, four years after we met. We have 2 insanely cute daughters now.  I enjoy drawing, playing guitar, photography, travel, animals, spicy food, yoga, hiking, good movies, and the great outdoors.

I attended Bonita Vista High School in Chula Vista, CA, and graduated with the class of 1988. I have a B. A. in Studio Art from the University of California, Irvine. My last year of five I spent in Bordeaux, France on the Education Abroad Program, where I traveled extensively and enrolled in art courses instructed in French. I graduated in 1993 and returned to San Diego.

Two months later I somehow found a job. I was doing primitive CG pre-visualization of architectural and engineering projects at a small business called "Digital Design Simulations". This marked my introduction, albeit meager, to 3D computer graphics.  I worked there for a year, and in June of 1994 got a part-time design internship at a small game developer, Presto Studios, in San Diego. I received the internship despite a nebulous portfolio and no practical design experience. I was initially hired to assist Phil Saunders in the design of the adventure game "Journeyman Project 2: Buried in Time". As the game's scope snowballed my role as a designer expanded, and I was eventually hired on.  I learned how to paint and create textures in Photoshop, did some visual effects in After Effects, I acted in some of the game's video sequences, and I even did a little writing for some of the in-game text.

I went on to the positions of Creative Director on "Gundam 0079," Conceptual Designer on "Journeyman Project 3: Legacy of Time," Art Director for John Saul's "Blackstone Chronicles," and Creative Director on "Star Trek: Hidden Evil". On these projects I also took on the role of 3D artist using the production skills I had acquired along the way. Meanwhile I began teaching myself character animation on my spare time, because it looked like fun and the software was becoming cheaper and more accessible.  I was inspired by the movies Toy Story and A Bug's Life, and more importantly by all the other amateur animators I was starting to see on the internet.  I grabbed a copy of Animation: Master and started reading and researching everything I could about animation and doing test exercises.  My third animation test, a lip-synch test called "Alien Song", became a viral hit on the internet.

I left Presto Studios in November of 1999 after five wonderful years to search for new challenges and hopefully work in films. I moved to the San Francisco Bay Area and took on some freelance visual effects work for the movie "Titan AE" as well as other projects. In December of 1999 I was contacted by Pixar Animation Studios (the president had received a copy of "Alien Song" by email) and I have worked there ever since March of 2000.  “Monsters, Inc.” was my first feature project at the studio and I have worked on almost every Pixar feature film since then, including “Finding Nemo,” “The Incredibles,” “Cars,” “WALL•E,” (for which I won an award from the Visual Effects Society) “Toy Story 3,” “Cars 2,” (for which I was a Directing Animator) “Brave,” and "Monsters University".  In addition to my work as an animator, I worked alongside John Lasseter and Rob Gibbs as co-director on a number of the “Cars Toon” short films including “Rescue Squad Mater,” “Mater the Greater,” “El Materdor” and “Tokyo Mater.” I most recently worked as a Supervising Animator on Disney•Pixar’s upcoming feature film “Inside Out,” set to release on June 19, 2015.

I also teach animation on my spare time.  I taught at AnimationMentor.com for about 7 years, and I'm currently teaching at The Animation Collaborative in Emeryville.

I always enjoy learning new skills and finding new ways to expand my creative contributions. I have been lucky enough to work in places that allow me to grow and take on new challenges.