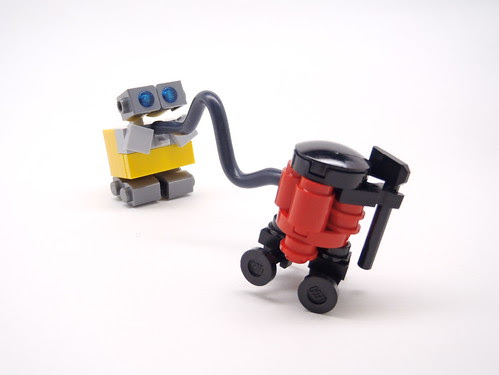 Day 3: Meets a Vacuum, a photo by lk.lkaz on Flickr.
A friend just sent this to me. It's based on a promo scene I did for WALL-E back in the day, and I love the simplicity of the Lego design!   Here's the clip it references:

At long last, here is my Cars 2 reel.  This contains most of the production shots I did for the film, but unfortunately none of the prepro tests (which I find the most interesting and fun to do).

This was my first feature film as a Directing Animator, alongside Michal Makarewicz, so I had a lot of other responsibilities besides animating.  Director Animators are responsible for supporting their fellow animators creatively and technically, as well as representing animation in other departments' reviews.  For example, we would often visit animators at their desks to give feedback between Director reviews, and I was responsible for training many of the animators who had never worked in the Cars world before.  I would also attend reviews for FX, Crowds, and other downstream departments in case there was a question or note for animation.  Supervising Animators (the highest ranking animators) drive the animation production, and are responsible for casting shots, budgeting time, giving feedback to animators, and working with the director and producer, as well as the leads from other departments.  Usually Supervising and Directing Animators don't get to do a lot of actual animation footage on a film because they're so busy attending meetings and helping the animators.  However, on Cars 2 the department was able to produce record-breaking amounts of footage every week, because the rigs are so simple.  This allowed me and the other leads to contribute more footage to the show than would normally be possible.

Being a lead on a film is (obviously) much different than being an animator.  You have a lot more responsibilities and you don't spend a lot of time at your desk.  On the upside, I really enjoy having a larger influence on the film and getting to interact with so many people inside and outside my department, including the Director.  On the downside, I often miss the zen focus of just sitting at my desk and losing myself in the process of animation.  Cars 2 afforded me both opportunities, and I don't expect that will come again.  I also don't know if we'll ever see John Lasseter direct again, so it was a wonderful chance to work with him again.  John is a great boss, as you can imagine, and he really invites his team to bring their own creative ideas and solutions to the film.  On Cars 2 in particular, because the production timeline was so short and his availability so limited, he really relied on us to take initiative and solve problems on the show in his absence.  This gave the team a greater sense of investment in the film, and made for a more enjoyable experience (even if it is more hectic and stressful at times).
Posted by Victor Navone at 10:04 AM 8 comments: