Check out this new trailer for Toy Story 1 and 2, which will be rereleased in theaters in 3D this Fall. Of course the trailer itself is better seen in a theater in 3D, but it's still pretty good on your computer.
Posted by Victor Navone at 9:20 AM 6 comments:

I just got back from Comic Con in San Diego. It was great to see some old friends (and my Mom) and dive into the sea of geek. You really can't grasp the size of this event without seeing it first hand. To that end, I've posted a bunch of photos, including some from "Flynn's Arcade", a replica of the arcade in the original Tron, built in a warehouse in downtown SD as part of a promotional gimmick.

I also got into the Disney 3D panel, hosted by John Lasseter, where they showed clips from upcoming films. We saw the new 3D teaser for the Toy Story 1&2 double feature, the opening sequence of Toy Story 2 in 3D, a Toy Story 3 teaser (featuring Ken), some Beauty and the Beast in 3D, and two sequences from The Princess and the Frog. Then Hayoa Miyazaki showed up and premiered a clip from Ponyo. Lasseter and Miyazaki were given honorary Inkpot awards for there contributions to animation. Patton Oswalt was there to moderate the ensuing panel, which featured John Lasseter, Lee Unkrich, Kirk Wise, Ron Clements, John Musker, and Miyazaki.

There was an Avatar panel featuring James Cameron that I would have liked to attend, but I didn't want to have to wait in line for hours. I also missed the panel on Walt Stanchfield, which really bummed me out. Luckily, Animation Mentor recorded the event and will be sharing it online for free!
Posted by Victor Navone at 5:02 PM 4 comments:

Shortly after I returned from Singapore the cooling system on my Mac G5 leaked and fried the power source. I finally got it back on Sunday and I'm slowly catching up on everything, including posting photos from my travel. I haven't added a lot of useful descriptions yet, but hopefully you can still enjoy them. I gave a 5-hour (gasp) lecture on animation research, planning and blocking. It was a fun event, and best of all I got to hang out with lots of other talented artists, including Craig Mullins, Feng Zhu and Alex Alvarez. We had lots of great food and leveraged our jet lag to help us party to the wee hours. I also got to tour the Lucasfilm studios there, and I even met a few Animation Mentor students. I'm already looking forward to my return visit!
Posted by Victor Navone at 1:40 PM 5 comments: 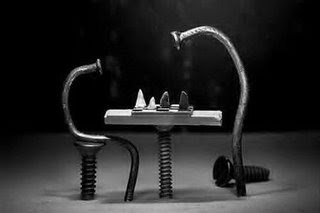 Here is an amazing compilation of photos of... Nails. Not only are these fun to look at, but they are great examples of how staging, lighting and line of action can tell a story visually. Note how the shapes of the nails can communicate emotion, intent, physical state, and even age. When two or more nails are present in the frame, you can deduce their relationship by the contrast and/or affinity of their poses, their relative sizes, and their spacial placement. Enjoy!
Posted by Victor Navone at 10:15 AM 7 comments: