Some thoughts on "Ratatouille" 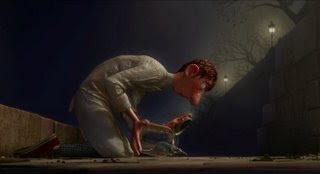 A couple weekends ago (June 2) I had the pleasure of seeing Ratatouille with my fellow Pixarians at its wrap party. Now, we had all had a few drinks, and the crew was pretty exhausted, so we weren't the most objective audience, but I think it turned out fantastic. I'll admit, the premise of a rat who wants to be a chef never excited me that much, but when the story is in the hands of Brad Bird, you know you're in for something special. The story was funny and entertaining, the characters memorable, and the production values are off the charts. This is by far the best looking film Pixar has ever done, and probably the best looking animated film to date. The lighting is sumptuous, and the detail in the sets and characters is downright compulsive. Then there's the animation... There is acting in this film the likes of which has never been seen before in animation (at least not since the Golden Age of Disney), and the performances are more consistent throughout the film than ever before. This is partly because the Pixar animatosrs are at the top of their game, and partly because Brad Bird has written scenes that demand great animation. This film has definitely raised the bar on all levels, from story to cinematography to animation to shading to effects. It's such a dense and layered film, too, so I look forward to seeing it again (with a REAL audience) to pick up more of the details.

I only contributed one shot to this film, so I have the more distance from it than previous films, which makes it even more special to me. I don't know if this film will make a lot of money. How do you market cooking to kids and dads, and rats to moms? I just know that if people get to the theater, they will enjoy it. I expect this movie will be very well-reviewed, and hopefully that buzz will translate into some good revenues. Not that Pixar is in danger of extinction, or that if we don't break opening day records there will be layoffs or famine in the crew. But a movie with so much love and craftsmanship doesn't come along very often, and it deserves to be enjoyed by the masses. These movies we make are gifts to the world, so help us share the gift.

If you're reading this blog then you're probably already an animation fan and were likely going to see this movie anyway. But if you like it, see if you can't drag along someone else to see it who maybe isn't a fan. Tell your mom or the guy in the Starbuck's line. I bet they'll thank you later. And so will I.
Posted by Victor Navone at 8:00 AM