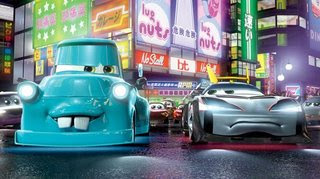 I can finally talk about the 4th (and most ambitious) Cars Toon: Tokyo Mater! Just like the previous 3 Cars Toons (which are now in rotation on all the Disney Channels, including HD), these are Directed by John Lasseter and Co-Directed by Rob Gibbs and myself. The difference is that Tokyo Mater is a 6 minute theatrical short that will be playing in front of Bolt starting this Friday, December 12th. And it's in 3D! And we made it only 5 months, but it looks amazing! And it's got drift-racing! And it was crazy hard to do! And it has an awesome techno soundtrack by BT! And BT played at our wrap party! And - zzzzzzzzzzzzzzzzzzzzzz.....

Anyway, I'm on hard-earned vacation now, and I look forward to seeing Tokyo Mater with a real audience this Friday. I hope to see you there, too! In the meantime, check out this article on ComingSoon.net, and here's a nice review on AintItCoolNews.
Posted by Victor Navone at 8:31 PM