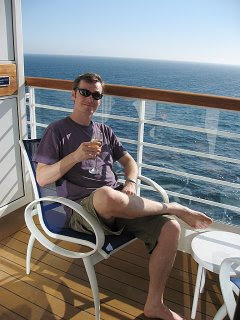 Ahoy Land-Lovers,
I am composing this blog post from onboard the Disney Magic Cruise Liner. I'm on the ship to promote the premiere-at-sea of WALL-E on June 27, and to tour the Mexican Riviera as well. Tough job, I know.

I'll be back home next week, by which time WALL-E will have premiered on land in the U.S., and probably elsewhere. I hope you get a chance to see it (and that you like it)! I worked hard on it for about 2 years and I'm very proud of what we accomplished. You'll also get to see the short film, "Presto", which is worth the price of admission by itself. It has some hilarious and astonishing animation, and is directed by legendary animator Doug Sweetland.
Posted by Victor Navone at 8:21 AM