If you happen to be watching American Idol tonight (and I wont hold it against you if you do) keep an eye out for the commercial I directed for State Farm insurance featuring characters from Pixar's "Cars". 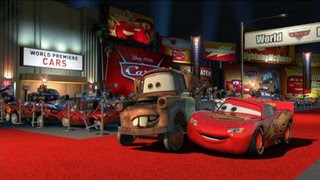 Okay, it's a commercial, not high art, but it was a lot of fun to work on and I think it turned out really well. My first directing gig at Pixar and all the talented people around me made me look good! I wasn't involved in the story development but I directed the layout, animation, lighting, fx, editing and sound, and I animated a couple shots in there, too. I'll post a Quicktime of the commercial to this blog sometime after the premiere.
Posted by Victor Navone at 9:44 AM