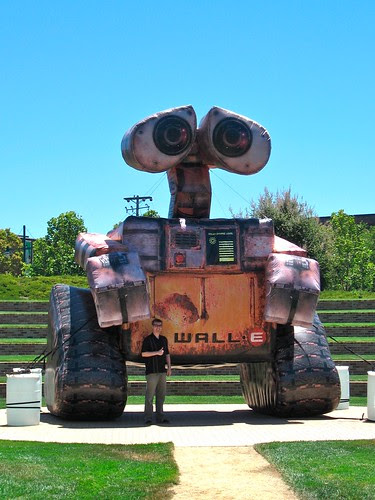 WALL-E's been out for over a week, so hopefully you've had a chance to see it. It was a really fun show to work on for me. Because there was so little dialog, the animators had a lot of leeway for adding acting beats and ideas to help further develop the characters visually. Very often I would end up adding time to my shots (sometimes even doubling the length) and really indulging a moment. Here is a breakdown of most of the work I did on it:

-------------SPOILERS AHEAD!---------------
"Day at work" - I did the shots of Wally opening the twinkie and the roach jumping in. Then Wally boxes up, parks in his shelf and rocks himself to sleep. The rocking thing was something I had done in a test animation and Andrew liked it so he had me add it to this scene. I also did the next scene where Wally wakes up, batteries low, and tries to put on his treads. At the time we had a newborn baby, and I wasn't getting enough sleep, so I was involuntarily doing lots of research for the scene.

"Eve arrives" - I did the stuff of Wally coming home, then seeing the red laser dot and starting to chase it down the freeway offramp.

"Courtship" - The scene of Wally watching Eve scanning from atop a reactor, then boxing up as she zooms by and shuts down.

"The plant" - The loooong scene where Eve tries to shoot the Big Mouth Billy Bass, then Wally starts handing her objects to play with: eggbeater, bubblewrap, lightbuld, Rubik's cube, etc. Then she pulls the tape out of the VHS tape and he freaks out. He rewinds the tape and puts it in the machine. It plays back and he presents the video to Eve. She scans it.

"Eve vigil" - Wally and Eve, sitting on the bench. He pries her arm open to hold her hand, it clamps down on his hand, he tries to free himself and falls off the bench. This is a scene that I added a lot of time to, and Andrew let me "go for it". 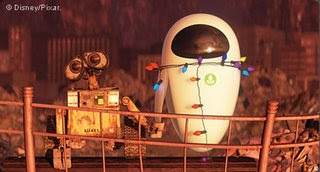 "Spacewalk" - I did the initial stuff of Wally flying around with the fire extinguisher. He and Eve whiz past each other, then he slowly works his way back to her and sprays her with it. She says to get going, and he instead uses the extinguisher to spin himself around and fly away. The sequence was changed after I finished my shots, so some were omitted and others were reworked a bit.

"Garbage airlock" - I did the shot of Eve staring at the plant for a while, then tossing it and offering her hand to Wally: "Directive".

"Showdown" - My only human scene on this film. I did the stuff of the Captain hotwiring the video system and taunting Auto: "Look what I got, Auto! That's right, the plant! Oh, you want it? Come and get it, Blinky!" Then he yanks the cables out. The cable rig was really hard to work with, so I animated the Captain first pantomiming the action, did some 2D animation of the cables on top of the 3D, then match-moved the 3D cables to the 2D motion on 1's. It was hard.

"Back on earth" - I did the stuff of Wally rebooting after he has just been repaired. Eve tries to jog his memory, but he doesn't recognize him. He cubes some of his souvenirs, then exits, squashing the roach. Eve watches him from the doorway of the trailer, devastated.

-------------END SPOILERS---------------
That's all I can remember off the top of my head. This is definitely the most work I've done on any film so far. Including the Superbowl commercial, I think I did about 7 minutes of footage. I was involved very early in animation (I was on for 2 years, total) and this list doesn't include the test shots I did. When the DVD comes out around Christmas I'll post a reel. Thanks for reading!
Posted by Victor Navone at 4:50 PM